You are here: Home / Fun / 30 Family Movies (That Kids Love) for Movie Night: Bonus Activities Too!
When you buy through our links, we may earn an affiliate commission. As an Amazon Associate we earn from qualifying purchases. Learn more. 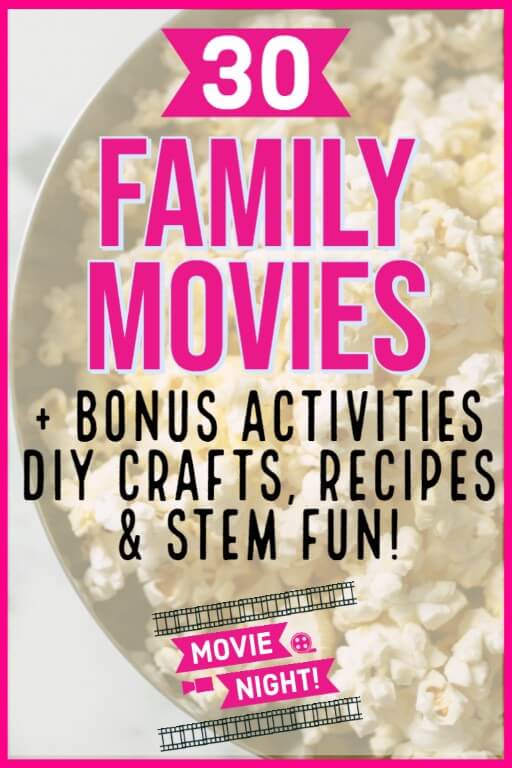 After asking our incredible Facebook Group and Facebook Page (you need to join us, if you haven’t yet!) for “family movie night” suggestions, I was overwhelmed by all of the fantastic ideas! I took many of them and created a list, complete with bonus activities like DIY crafts, recipes or games, to go with every movie! I have been using these free, printable, Chore Cards to let our kids earn the opportunity to have a movie night.

To make our movie nights have an educational element, our oldest has been reading the book that goes with our next planned movie night! We are LOVING Amazon’s Kindle Unlimited, which allows you to read many of these books for free (and you do not need a Kindle to read them!). Our younger kids are using Amazon’s Audible to listen to books for free too! For example, my kids just finished James and the Giant Peach which was free on Audible! Before that, their book was Harry Potter, which is free both to read and to hear the audiobook!

Lemony Snicket’s A Series of Unfortunate Events is about three orphans and their mean uncle Count Olaf. Jim Carrey plays the villain, and so that is a guaranteed win with kids! The orphaned children join forces and work together to outsmart their evil uncle. Once your kids are hooked by the movie, they will love reading the Lemony Snicket Book Series too!

BONUS: Lemony Snicket has a fabulous website full of fun kids activities like a “Secret in a Message” code deciphering challenge, or “Convoluted Code” cryptograms!

Finding Dory is Disney Pixar’s sequel to Finding Nemo (which you could also watch and use the same bonus project below)! Dory remembers her family and wants to find them, so she goes on an adventure with her friends Nemo and Marlin to find them. (G)

BONUS: Make your own Finding Dory swimming fish that you control with acrylic paint, mod podge, a bottle of water and ketchup packets. Check out the video below. This one is amazing!

Harry Potter is about a young boy named Harry who finds out that he has magical powers when he turns eleven-years-old.

BONUS: We have an entire Harry Potter Lesson Plan full of STEM activities, crafts and recipes! In addition, watch the video below to see how you can turn a pencil into Harry Potter’s magic wand using a glue gun, beads, and paint mixed with PVA glue.

Toy Story is about a boy named Andy and his collection of toys that come to life whenever he is not in the room. There is Woody, a cowboy doll, Buzz Lightyear and Slinky Dog, among many others. Woody is Andy’s favorite though. What happens though when they get lost and the mean boy nextdoor, Sid, finds them?

BONUS: Make your own Slinky Dog craft with pipe cleaners and paper!

Trolls World Tour is an adventure with Queen Poppy and Branch, as they visit trolls who control each of six kinds of music: Funk, Techno, Country, Pop, Rock and Classical.

BONUS: Make fun troll hair headbands to wear during the movie. All you need are a headband, tulle and felt! You can buy a great package of loads of tulle and headbands here! Full measurements here.

Paddington is about the adventures of a sweet, young bear (who happens to love marmalade!) and his attempt to avoid a museum taxidermist.

BONUS: Surely the best bonus activity for Paddington is to make Alton Brown’s orange marmalade recipe and to serve it as a snack during the movie!

The Sandlot is perfect for all of the baseball lovers out there! When they lose a baseball in a scary neighbor’s yard, they have to work hard to get it back. (PG)

BONUS: Turn a real baseball (even the old one sitting in your garage will work!) into the coolest bracelet, as show below!

Miracle is about a hockey player who became the coach of a team who made it to the Olympics. This is based on a true story and teaches persistence an the value of not “giving up,” even when you are embarrassed and feeling defeated. (PG)

BONUS: Make your own DIY ice hockey rink with real ice (this is SO cool… pun intended!)

Wonder is about a family whose son, Auggie, is born with facial differences. After going through 27 surgeries and being homeschooled for years, he joins a mainstream school in fifth grade. How does he handle bullying and this major change? You are sure to be inspired! (PG)

BONUS: Here is a fantastic Wonder “Choose Kind” Bingo Game to encourage your children to do acts of kindness! There are also free worksheets for a word search, a writing prompt and fun coloring pages.

Stuart Little is based on E.B. White’s classic story of a mouse who came for dinner, and stayed with the human family! (PG)

BONUS: Build your own little boats out of pool noodles and race them in your bathtub!

The Wizard of Oz & Cootie Catcher

The Wizard of Oz is the classic story of a tornado taking Dorothy (and her dog, Toto) to the land of Oz. Join Dorothy, and her new friends – the Tin Man, the Scarecrow and the Cowardly Lion, as they make their way down the Yellow Brick Road to pay a visit to the Wizard of Oz!

Big Miracle takes place in the Cold War era and is a story about how a news reporter from a small town, along with a Greenpeace volunteer, save three gray whales that are stuck under ice in the Arctic Circle. (PG)

BONUS: Make your own floating, egg carton whales like this and use them to act out scenes from Big Miracle during bathtime!

Disney’s Swiss Family Robinson is a heroic tale of what happens after the Robinson family become stranded on a deserted island. They are survivors of a shipwreck and have to work together as a team to make their new home into a place they can survive in. At the end, will they want to return to their old home? Or will they end up liking their deserted island life? (G)

BONUS: We love cardboard projects, like the cardboard vending machine that we made in our Hersheypark Activities and the cardboard DIY Nintendo Switch, so now it is time to build a treehouse like below!

Coco is Disney’s movie about a boy who wants to be a guitar player. On his musical journey, he discovers secrets about his ancestor’s stories and traditions.

BONUS: Make your own calavera, or sugar skull mask, with this free printable template.

Charlotte’s Web is a classic that every kid absolutely must see at some point! It is a sweet story about friendship and Wilbur, the lovable pig.

Wall-E is about a robot who is created to clean up our polluted earth. When Wall-E discovers a living plant, he goes on a mission to tell everyone what he found and to help bring the humans back home. (G)

BONUS: Make your own 3D Wall-E using this template and the following video!

How to Train Your Dragon & DIY Dragon Puppet

How to Train Your Dragon stars Hiccup, a young Viking boy, who becomes friends with one of his enemies, a dragon named Toothless. Humans and dragons are supposed to be enemies, not friends! Yet they overcome many challenges, including an ultimate obstacle, to save both the human and dragon worlds. (PG)

BONUS: Make your own DIY dragon puppet as shown in the following video!

Hook, starring Robin Williams, Julia Roberts and Dustin Hoffman (talk about a cast of superstars!), is an update to the classic Peter Pan. Get lost in the fun stories of Never Never Land. (PG)

BONUS: Make your own DIY pirate ship using an egg carton and an old newspaper like this.

The Princess Bride is a love story full of everyone’s favorites: pirates, fencing, true love, giants and a princess. (PG)

BONUS: Make your own sword out of cardboard, paper towel rolls, as shown below.

The Spiderwick Chronicles & Make Your Own Magical Creature

The Spiderwick Chronicles is a fantasy adventure about the Grace family and their move to a rundown, old. family estate. When they discover a field guide about the magical creatures living there, they discover that the creatures also want the book they found. (PG)

BONUS: Make your own creature from The Spiderwick Chronicles with this free printable from Scholastic.

James and the Giant Peach is the magical story of an English orphan named James who lives with his two mean aunts in London. One day, he finds a massive magical peach and goes on an adventure to New York with the insects that live in the peach. (PG)

You cannot have a list of kids movies without a Jim Henson classic! The Muppet Movie is about a trip to Hollywood for Kermit the Frog, who is dreaming about being an actor in show business. (G)

BONUS: Make a Rainbow Connection craft project that your kids will love using the following video.

Inside Out & Stress Ball Craft

Inside Out is about the emotions (Joy, Fear, Disgust, Anger and Sadness) that work together when Riley, an 11-year-old, moves from her home to a new city.

BONUS: Make your own Inside Out Stress Balls using balloons, flour and a black sharpie like this!

The Sound of Music & The Lonely Goatherd Marionette Craft

The Sound of Music is perhaps the most popular musical of all time. Maria is a nun who becomes the governess for the Von Trapp family. It is anything but a smooth transition, but you are guaranteed to fall in love by the end of the movie, when they escape over the mountains to run away from the Nazis. (G)

BONUS: Make this adorable marionette to act out “The Lonely Goatherd” scene from The Sound of Music!

Mary Poppins is the classic tale of an English nanny who brings a mother and father back together with their two kids. (G)

The Call of the Wild & DIY Soda Can Wolves

The Call of the Wild is about a domesticated dog named Buck who is sold as a sled dog in the Yukon and the brutal experiences that ensue.

BONUS: Make wolves out of aluminum soda cans, as show in the video below!

Pete’s Dragon is about a boy named Pete who lives who claims to live with a green dragon in the woods. A girl and a fores ranger are determined to figure out the truth.

BONUS: Make your own Pete’s Dragon art using water and ink. This is so magical!!!

Greatest Showman is a musical inspired by P.T. Barnum. Watch how a man’s dreams of show business come to life.

BONUS: Make your own wishing machine, just like you saw in the Greatest Showman!

Onward is the story of two elf brothers, Barley and Ian, spend the day with their late father. Laurel, their mom, discovers her sons are missing, and she goes on a quest to find them. (PG)

Abominable is about three friends, Peng, Jin and Yi, who find a yeti named Everest on their roof. They go on an adventure to try and find Everest’s family.

Do you have more great family movie night ideas? Please leave them in a comment below! And don’t forget to share photos of your next movie night on our Facebook Group and Facebook Page!