You are here: Home / Virtual Camp / Australian Animals & Fun Facts: Aussie Crafts, Games & Activities for Kids
When you buy through our links, we may earn an affiliate commission. As an Amazon Associate we earn from qualifying purchases. Learn more. 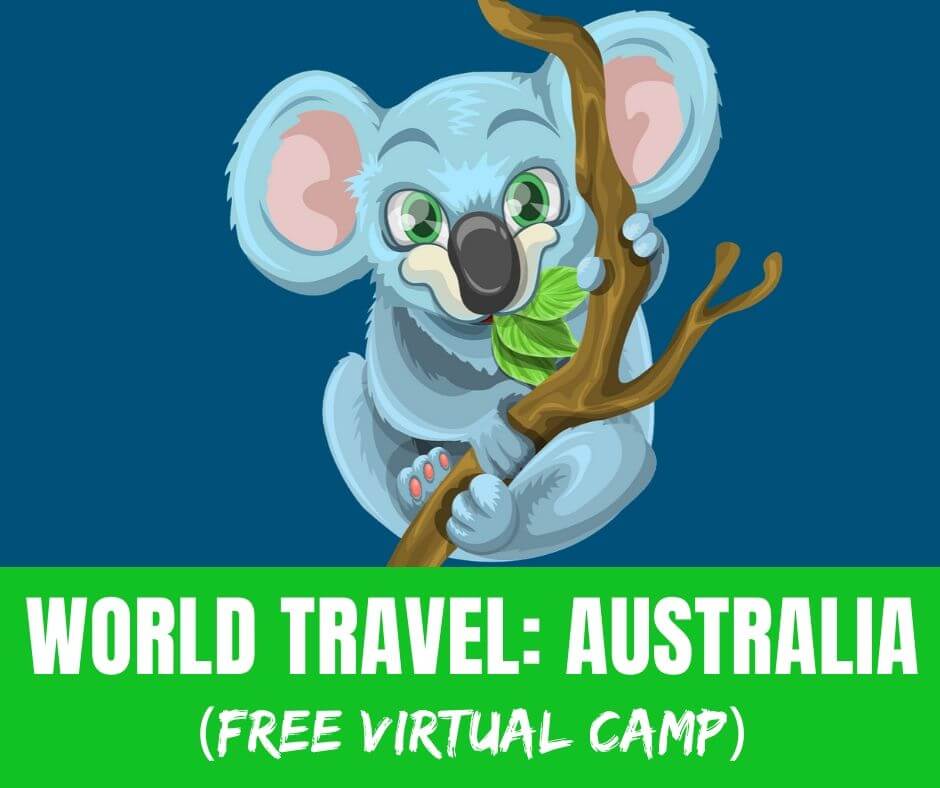 We have visited Africa, Asia and Mexico during our Virtual Camp’s World Travel Tour. Next, we will learn about Australian animals, fun facts about Australia and make some awesome Australian crafts! We will even answer the question: “how do you make a boomerang out of paper that comes back to you when you throw it?” (Spoiler: it is AMAZINGLY cool!)

P.S. We are using these passport books to keep track of which places our kids explore, and to record our favorite things that we learn about each place that we “visit.” It is a great way to revisit where we have “been.”

Australia has a wide variety of reptiles, birds, animals and plants. The most well-known animals are probably the wallaby, platypus, dingo, koala, kangaroo and echidna. Here are 15 wild animals of Australia to learn about!

In Australia, you will find koalas hanging out in the trees, particularly in Queensland and Victoria. Koalas are herbivores and mainly eat eucalyptus leaves.

If you combined a duck, a beaver and an otter, you would get something similar to the platypus! The platypus is a venomous mammal that lays eggs.

The unofficial national animal of Australia is the kangaroo. They are only found in Australia and are native to the land.

The best place to see a wombat is in the Epping Forest National Park in Australia. Other than in that park, wombats mainly live in the mountains of Australia.

These marsupials are the smallest member in the kangaroo family. Unfortunately, there is a species of wallabies that are also endangered because people hunt them for their fur.

Don’t let a Tasmanian Devil bite you! They have one of the strongest bites (per unit body mass) of any land predator! As you may have guessed, they are carnivorous animals.

The wild dog of Australia is called the dingo. They are the largest terrestrial predator found in Australia.

Predators beware! Thorny Dragons have amazing defensive abilities, even though they are a small species of lizard.

These are among the largest of all toads and frogs in Australia. They are very toxic, so stay clear if you see one!

These spiky anteaters are a rare animal. Echidna have sharp spines covering their bodies, similar to porcupines.

This endangered species is one of the shortest mammals in the world. Macrotis are also known as Greater Bilby.

The most venomous snake in the entire world is the Inland Taipan and lives in central east Australia. Their venom is more toxic than any other reptile’s venom!

As the fourth largest lizard in the world, Australian Goanna’s are huge! The largest monitor lizard lives in Western Australia and is called the perentie.

Australia has many marsupials and the Tiger Quoll is the longest marspuial in the world. You can find Tiger Quolls in Tasmania and mainland Australia.

One of the most frequently traded wild animal in Australia is the sugar glider. This species lives in family groups on the mainland of Australia.

Is Australia a Continent or a Country?

What Countries are in Australia?

Is New Zealand Part of Australia?

Checkout these fun facts about Australia!

Since the center of Australia contains a lot of deserts, 90% of Australians actually live on the coast. That is probably why most of us think of beaches when we picture Australia!

2. The Swiss Alps get less snow than the Australian Alps

The Australian Alps are a mountain range between Victoria and New South Wales. If you love skiing, you will love these mountains! Plus, their main “snow season” is between the months of June and September, making it the perfect place to ski when it is the summertime in the northern hemisphere!

3. The cleanest air on earth

Tasmania, an island in Australia, has the cleanest air in the world. Over one third of the island is a national park. If you love hiking, biking, caves or kayaking, Tasmania is the place for you!

4. Wild animals are 80% unique to Australia

Of the wild animals found in Australia, 80% of them are unique to Australia and cannot be found (in the wild) anywhere else.

5. The largest eco-system is the Great Barrier Reef

Of all of the eco-systems in the world, the Great Barrier Reef’s is the largest. You can actually see it from outer space!

Now that we have learned a bit about Australia, let’s make some Australian arts and crafts, and play a game!

2. How to Play Cricket

Have you ever heard of the sport called cricket? It is one of the most popular sports in Australia. Learn how to play cricket (kid style!) in the video below. If you have a sporty kiddo who needs something to stay busy this summer, you should totally get a children’s cricket set!

Learn about aboriginal dot painting, made by the indigenous people of Australia. Then, grab a qtip and some paint to make your own!

How Do You Make a Boomerang for Kids (That Comes Back to You)?

You can actually fold a piece of paper and create an origami boomerang that comes back to you when you throw it! Watch this Red Ted Art video to learn how to make a DIY boomerang that actually works!

Let’s try some traditional Australian recipes that kids will love!

Kids love chicken schnitzel, which is a fried chicken breast. In Australia, they use the term “schnitty” as an abbreviation for chicken schnitzel, and serve it with gravy and chips (their word for American “fries.”) Here is a great recipe to try.

The Aussies make a delicious meat pie out of ground beef, spices and a delicious crust. Try this recipe!

We wouldn’t want our kids to be disappointed by skipping dessert! Lamingtons are a sweet sponge cakes that are coated in chocolate and topped with coconut. Here is an Australian Lamingtons recipe.

Let’s learn 10 Australian slang words! Warning: you may start using these Aussie terms, as they are quite addictive to say!

If something is excellent, you call it “bonza.”

If someone apologizes to you for something, you might say “no worries, mate,” meaning it is not a problem.

If you want to say hello in a friendly way, you say “g’day mate.”

The most important meal of the day is breakfast, or “brekky,” as they call it in Australia.

Are you a McDonalds fan? In Australia, they call it Maccas.

Another way of saying a man is to say a “bloke.”

7. Snags on the barbie

When you have sausages cooking on a BBQ, you would say that you have “snags on the barbie.”

If something is honest or genuine, it is called “fair dinkum.”

The way you say “afternoon” in Australia is “arvo.”

It is hot in much of Australia, and you keep your drinks cold by storing them in a “stubby cooler.”

There’s tons to explore in Australia for kids! Checkout the following virtual field trips and tours of Australia.

Australia’s largest city is Sydney. Let’s take a look at all of Sydney’s attractions, sights and gorgeous beaches in this video.

Australia’s largest zoo is called Taronga Zoo and is located in Sydney. You can take a virtual walk around the zoo and see animals, as well as gorgeous views of Sydney’s harbor here.

Do your kids love amusement park rides? You can actually walk around Sydney’s Luna Park and explore it’s rides here.

These kids books about Australia are a great way to learn more about the country, while practicing reading! Some are even available for free with  Amazon’s Kindle Unlimited program, which you can try for free (and you do not even need a Kindle).

1. Diary of a Wombat

Want to learn more about the wombat, a slow (but cuddly) Australian animal? Diary of a Wombat is a funny book with fantastic illustrations.

2. Over in Australia: Amazing Animals Down Under

Australian animals are some of the most unique animals, since you can only find them in Australia. Learn more about them in Over in Australia: Amazing Animals Down Under.

3. Australia: Travel for kids: The fun way to discover Australia

What better way to get to know Australia virtually than through a fun travel guide for kids! Australia: Travel for kids: The fun way to discover Australia will expose your kids to the history, flags, wildlife, geography and culture of Australia.