You are here: Home / Lesson Plans / 1st Grade / Benjamin Franklin the Scientist: Elementary School Lessons
When you buy through our links, we may earn an affiliate commission. As an Amazon Associate we earn from qualifying purchases. Learn more. 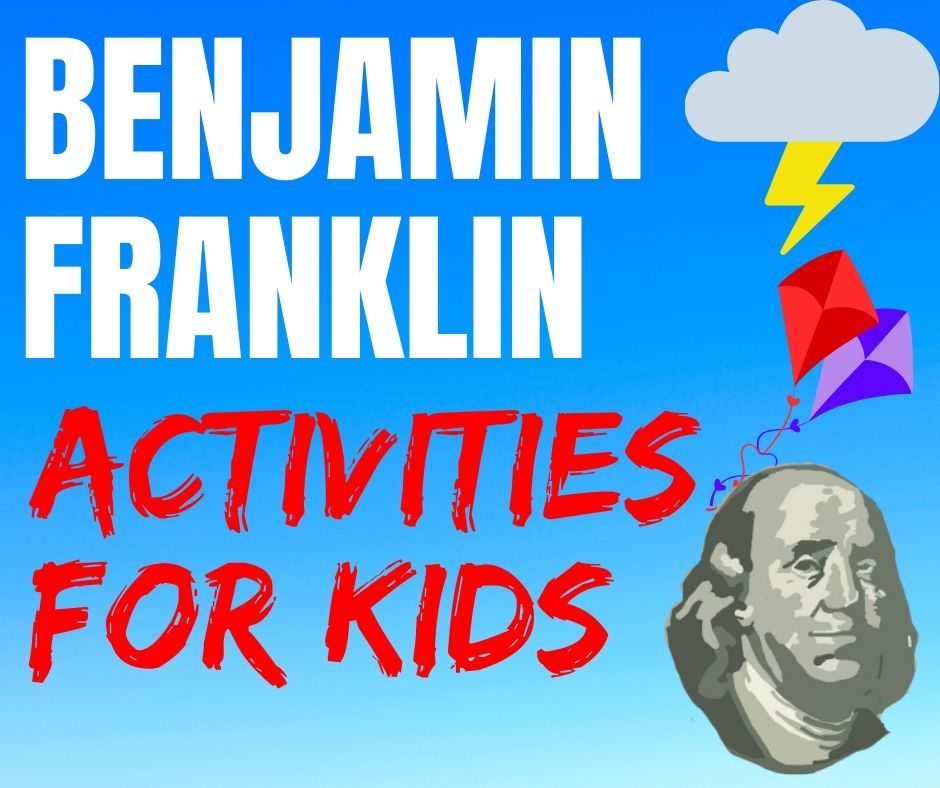 April is both library and kite month, so one of the fantastic members of our Parent Vault Facebook Group suggested that we celebrate with a Benjamin Franklin lesson plan. How brilliant is that idea?! Ben Franklin started the very first public library in America and was said to have demonstrated a connection between lightning and electricity by placing a key on a flying kite. Some people even say that he discovered electricity, but we will learn if that is true or a myth during our reading exercise!

We also have some Benjamin Franklin-inspired electricity science projects like making light bulbs turn on with play dough, creating a battery out of an ice cube tray and using static electricity to separate black pepper from salt! In addition, we have some great reading, writing prompts and free printable math worksheets, including Benjamin Franklin’s favorite – Magic Squares (the original math puzzles, from before the time of Sudoku!!!).

In honor of Benjamin Franklin’s connection to the field of electricity, let’s do some fun electricity science experiments!

PBS produced this brilliant Benjamin Franklin Video that is an “Amazon’s Choice” product with rave reviews for a reason! PBS did a fantastic job of bringing the history of Franklin to life. This is a great supplement to the Benjamin Franklin readings below.

The Franklin Institute has put together this website full of Ben Franklin’s history, explanations of his inventions and discoveries, and other fun activities. Read as many articles as you would like (younger students may need help with this). If you only have time to read one, I would highly recommend this one, which talks about Franklin’s kite and key electricity experiment!

Kindergarten – 2nd Grade: After reading about Benjamin Franklin above, print out this kite worksheet to write down two fun facts that you learned!

3rd – 5th Grade: Read over this list of Benjamin Franklin’s Famous Quotes. Pick one that inspires you and use that as your writing prompt! Why did you select the quote? What does it mean to you? How does it apply to your life or the lives of people around you?

3rd – 5th Grade: You are in for such a fun math treat!!! Magic Squares go all the way back to over 4,000 years ago in China. These fun math puzzles have a magic number, which the sum of the numbers in every row, column and diagonal must add up to. Benjamin Franklin LOVED Magic Squares so much, that he even made his own square that he said was “the most magically magical of any magic square made by any magician.” You can try making your own too!

Did you know that in Benjamin Franklin’s younger years, he was actually quite the athlete! He only became the portly figure that we now know him as, after he got bladder stones as a grown up. In fact, one of his first experiments was swimming with a kite to see if he would be pulled by the wind! So let’s get up, stretch and have a brain break with this swimming song and dance!

And the most fun part… share a photo or video of your Benjamin Franklin science experiments, your Benjamin Franklin inspired art (or of any of the other fun activities) on Facebook! Make sure to include a link to this website or to our Facebook Group and Facebook Page, so that we can see it too! I’ve purposefully added a lot of options for parents who need to keep their kiddos occupied for more time and to allow you to cater to your children’s preferences.