You are here: Home / Virtual Camp / Brazil Facts for Kids: Sao Paulo, Rio, Animals & FUN!
When you buy through our links, we may earn an affiliate commission. As an Amazon Associate we earn from qualifying purchases. Learn more. 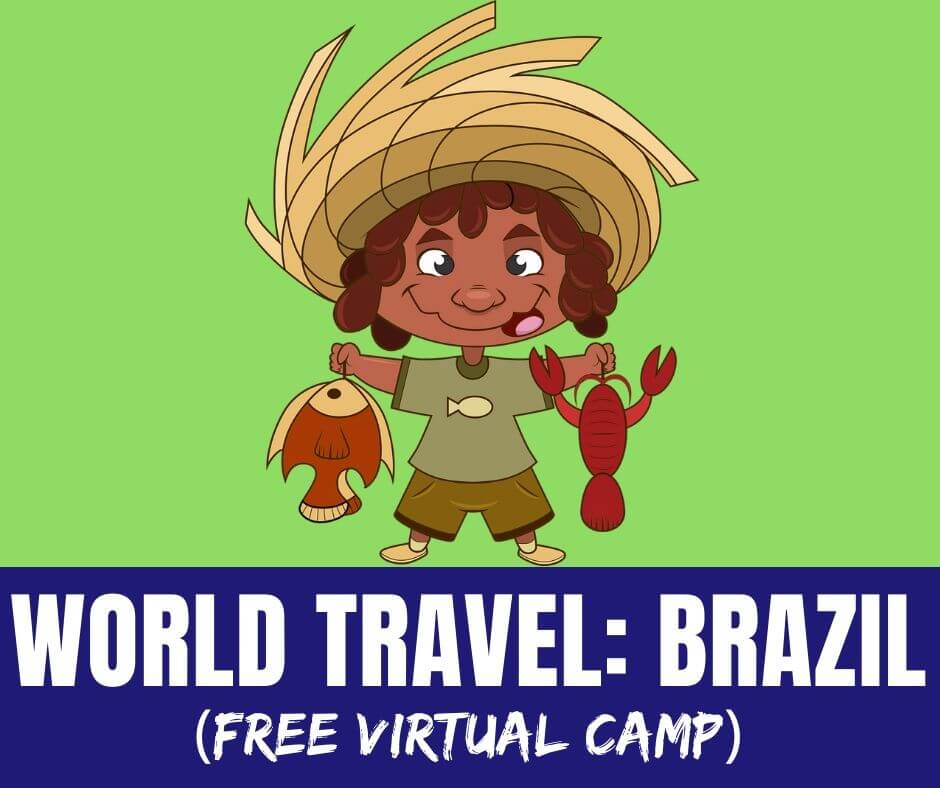 We have visited Australia, Mexico, Asia and Africa, during our Virtual Camp’s World Travel Tour. Next, we will learn about Brazilian animals, sports and recipes. Plus, we will take a closer look at Sao Paulo in Brazil and the Rio de Janeiro carnival (with virtual tours and videos of both). We will even make our own DIY Rio carnival masks and costumes for kids!

P.S. We are using these passport books to keep track of which places our kids explore, and to record our favorite things that we learn about each place that we “visit.” It is a great way to revisit where we have “been.”

In southeastern Brazil is a city called Sao Paulo. Roughly thirteen million people live in this city, which is located halfway between the cities of Rio de Janeiro and Curitiba. Sao Paulo is the largest city in Brazil, and the seventh largest city in the whole world. Let’s take a virtual tour of Sao Paulo and learn more about Brazil’s financial center!

Explore Sao Paulo and visit places including the Octavio Frias de Oliveira Bridge (a cable-stayed bridge over the Pinheiros River), the Metropolitan Cathedral, Ibirapuera Park and their Art Deco soccer stadium called Estadio do Pacaembu. You can even get a glimpse into what Sao Paulo looks like at night in this virtual tour!

Take a look here at some of the beautiful works of art that are housed in the Museu de Arte de São Paulo (MASP).

A carnival is a big festival or party. Every year, Rio de Janeiro has the biggest carnival in the world, which they call “Carnaval.” Roughly two million people are in the streets of Rio every day during Carnival. Some people even call it “the biggest show on earth!” Parades and floats fill the streets

Want to take a glimpse into what it is like at the Rio de Janeiro Carnival? Take a look at this video of some children competing in the junior carnival.

You can even make your own Rio carnival mask or costume like this. All you need are a paper plate, tempera paint and feathers.

What language do Brazilians speak?

How to learn Portuguese

Would you like to learn some basic Portuguese phrases? Here is a fantastic video that teaches you the basics of the Portuguese language in just twenty minutes!

What is unique about South America?

South America is a beautiful continent! Here are five facts about South America that make it unique from other places in the world.

1. The Andes are the world’s longest mountain range

Found near the western coast of South America are the Andes mountains, which span approximately 4,500 miles.

2. The Amazon rainforest has the greatest biodiversity

With approximately 40,000 plant species, hundreds of animal species and 2.5 million insect species, the Amazon rainforest has the greatest biodiversity of anywhere in the world.

3. Brazil has the largest number of UNESCO World Heritage Sites

In addition to being the largest country in South America, Brazil has 21 UNESCO World Heritage Sites (more than any other place.) Peru has the second most in the world and they only have 12 sites.

4. The Atacama Desert in Chile is the driest non-polar desert

It is common for the Atacama Desert in Chile to not see any rain for up to four years in a row, making it the world’s driest, non-polar desert.

5. South America contains 5 of the top 50 largest cities in the world

In addition to trying some traditional Brazilian recipes that your kids will love, make sure to drink some Guaraná Antarctica! It is a special beverage that is unique to Brazil and is amazingly delicious. The guaraná berry is a superfruit that comes from the Amazon in Brazil.

Pão de Queijo means “cheese bread” in Portuguese, and there are some of the most delicious appetizers or snacks EVER!!! They are naturally gluten free too, because they are made out of tapioca flour. Try this Pão de Queijo recipe, or you can even buy a pre-made mix here (to keep it really easy).

Brazil is known for its churrascarias, restaurants that cook meat in a churrasco style (similar to a grill or bbq). They make some of the most delicious, tender and flavorful meat, and the queen of all churrasco beef is picanha. Give this recipe a try!

A very popular dish in Brazil is feijoada, which are black beans. They are usually cooked with meat, as in this slow cooker Brazilian feijoada recipe.

Do you love chocolate? Then, you absolutely must make Brazilian truffles, also known as Brigadeiros. They are found at celebrations and birthday parties all over Brazil. All you need are the following four ingredients!

My husband’s family is from Brazil, and they swear by using only this type of Chocolate Malt Ovaltine (in the orange packaging!), but you can substitute regular cocoa powder if you absolutely must.

Watch the video below to learn how to make Brigadiero (and be sure to follow that sweet girl on YouTube at Inspired Sparks!)

Checkout these fun facts about Brazil!

1. The Amazon river is the largest in the world (by volume)

Scientists believe that the Amazon river is the largest based on volume, but that Africa’s Nile River is slightly longer. The Amazon river flows through Brazil and is actually not just one river, but it is made up of hundreds of waterways that cover over 4,250 miles.

2. Brazil has the largest variety of animals

3. Brazil is the most industrial nation in South America

The most industrial nation in South America is Brazil. They produce cars, steel, aircraft and chemicals.

In Portuguese, Brazil is spelled with a “s” instead of with a “z.” So they write their country’s name as Brasil.

São Paulo and Rio de Janeiro are the two most populous cities in Brazil. Even though the two cities only make-up 11% of the land in Brazil, 43% of Brazilians live there.

Want to learn even more facts about Brazil? Watch this video of Brazil facts for kids, or this one about Brazilian beaches. You can even see some of Brazil’s pink dolphin’s in this National Geographic Kids video!

Let’s discuss some of the magnificent Brazilian animals!

Their name comes from the fact that they have three fingers on each foot, as opposed to double toed sloths, which have two fingers per foot. The three-toed sloth’s fur has a greenish tint for camouflage purposes.

As their name suggests, anteaters consume ants! Their tongues have lots of tiny hooks on the surface, which allows them to grab insects to eat.

Known for their sharp teeth, piranhas are a freshwater fish with a strong jaw. They have the strongest bite among all bony fish, which is a dangerous combination due to how sharp their teeth are. Former President of America, Theodore Roosevelt, saw piranhas even consume an entire cow (skeleton and all).

They are known for the armor that covers their body. The armadillos also have very short legs, which is why they can run very quickly.

These frogs are highly poisonous, as you might guess from the name! Poison dart frogs have bright colors on their skin, warning predators not to eat them.

One of the largest cat species is the jaguar. They look similar to a leopard, but are a little bit bigger in size.

This bird is found in southern and eastern Brazil. The Toco Toucan has a large orange bill and a black body. Their eyes are black with a blue ring, which is then surrounded by an orange ring.

These primates have a red-orange mane that is similar to a lion. The majority of golden lion tamarins live in the tropical rainforest.

This mammal is the largest rodent species known to mankind. The capybara are semi-aquatic, so are mostly found in savannas or forests close to water.

These reptiles are in the Crocodilia order. The Yacara Caiman mainly lives in the water, but will come on land at times as well.

Brazilians love sports! Here are some of the most popular sports in Brazil.

The most popular sport in Brazil is soccer, which they call “football.”

You can find volleyball being played often on Brazil’s beaches.

If you combine football (soccer) and volleyball, you get a sport in Brazil that is called Footvolley.

Sports car and motorcycle racing is a sport that Brazil has also been very successful at.

This African-Brazilian warlike art is unique in Brazil. Capoeira combines dance, music and acrobatics. It is super fun to watch!

The sport of tennis has recently been increasing in popularity in Brazil.

The most popular form of martial arts in Brazil is Judo.

People who live on the coast of Brazil often surf as their daily sport.

While baseball has not always been a popular sport in Brazil, it has been gaining in popularity in recent years.

Brazil was the host country for two major sporting events in the past decade – the 2014 FIFA World Cup for soccer and the 2015 Summer Olympics in Rio de Janeiro.

These kids books about Brazil are a great way to learn more Brazilian facts, while practicing reading! Some are even available for free with  Amazon’s Kindle Unlimited program, which you can try for free (and you do not even need a Kindle).

Join a brother and sister who live along the Tapajós River in Brazil, where homes are built on stilts and people get from one place to another via a boat.

2. If You Were Me and Lived in… Brazil

Learn about Brazil’s culture and customs as the author, Carole P. Roman, explores the country.

If you are looking for a book for your beginning reader to practice reading on their own, this is it! Your child will learn what it is like to grow up in Brazil.