You are here: Home / Virtual Camp / Fun Facts About Mexico: Crafts, Games & Activities for Kids
When you buy through our links, we may earn an affiliate commission. As an Amazon Associate we earn from qualifying purchases. Learn more. 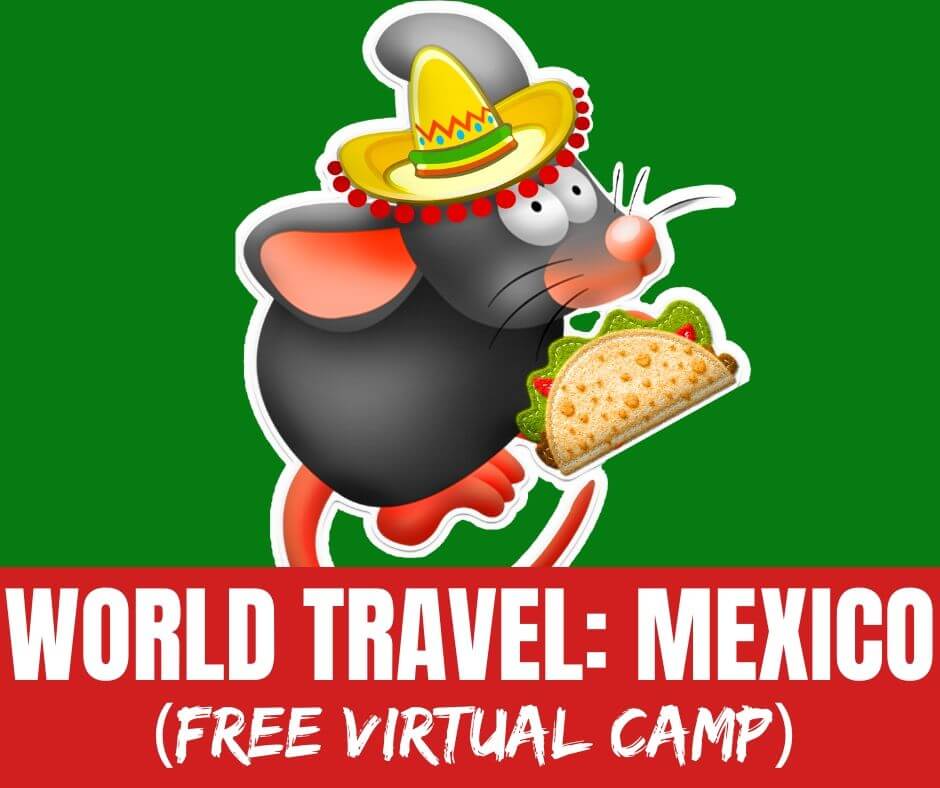 We have visited Africa and Asia during our Virtual Camp’s World Travel Tour. Next, we will explore and learn fun facts about Mexico! Ever since our Cinco de Mayo Activities for Kids, my children have been asking to learn more about the country of Mexico. We are using these passport books to keep track of which places our kids explore, and to record our favorite things that we learn about each place that we “visit”.

In today’s Mexico for Kids lesson plan, we will learn interesting facts about Mexico and take virtual tours of some amazing places like Chichen Itza, The Arch of Cabo San Lucas and Mexico City. We will make some DIY Mexican crafts such as pinatas (that don’t require messy paper mache!), Mexican tissue flowers and Mexican jumping beans. We will also learn about the kids of Mexico and the games, dances and music they like. Of course, a virtual trip to Mexico would not be complete without some delicious Mexican recipes with corn (and chicken!), and Spanish lessons for kids.

Let’s start with a few fun facts about Mexico!

Mexico is the largest of all Spanish speaking countries in the world! However, they did not always speak Spanish in Mexico. Native Indians lived there for thousands of years, before the Spanish conquistadors destroyed the Aztec and Mayan empires and took control. It was only when the Spanish colonists arrived that the Spanish language came to Mexico.

While Spanish is the most widespread language in Mexico today, there are still 68 national languages in the country. 63 of these languages are indigenous. However, the majority of people in Mexico only speak Spanish at this point.

The population of Mexico is very young, with over half of the people being under the age of 18 years old. That means there are a lot of children who currently live in Mexico.

The longest river is the Rio Grande

The Rio Grande is 3,108 km and actually starts in the United States (in Colorado) and flows all the way through to the Gulf of Mexico.

Mexico had over 500 species of mammals

There’s tons to explore in Mexico for kids! We will take virtual tours of historic sites including Chichen Itza, Mexico City, the MMAC Museum and the Arch of Cabo San Lucas.

Go on a 4k walk through Mexico City with this virtual tour. You will see lots of sites, the inside of architecturally significant buildings and even street performers.

Google, in conjunction with the British Museum, created this Chichen Itza Virtual Tour to allow us to explore the ancient Maya site on the Yucatan peninsula!

Next, take a trip to the Museo Morelense De Arte Contemporaneo Juan Soriano Museum (or MMAC Museum, for short), which is a contemporary and modern art museum. You can start your virtual tour of this fantastic space in Cuernavaca here.

Jump on board a boat for a virtual tour of The Arch of Cabo San Lucas here. This arch-shaped rock formation is all the way in the South, at the end of Mexico’s Baja California Peninsula. In Mexico, the arch is called “El Arco,” meaning “the arch” in Spanish.

Do you want to take a glimpse into what life is like as a kid in Mexico? Let’s take a look at classic toys that kids play with in Mexico, listen to their music and watch them perform a Mexican dance.

First, let’s checkout the toys and games that kids play with in Mexico here. Have you ever heard of a balero or a trumpo? Well, you will soon!

Next, we will listen to Mexican music for kids, including Mariachi music in this video.

You will be in awe after watching this video of kids in Mexico performing a classic Mexican dance in gorgeous dresses.

There are so many fantastic Mexican crafts for kids to pick from! My absolute favorites are the mini pinatas and the Mexican tissue paper flowers.

I love the adorable mini pinatas in the video below, especially because it does not require any paper mache mess! All you need is some cardboard (hello, empty cereal box from breakfast!), pretty tissue paper and liquid glue. If you want to follow the exact shapes that she makes in the video, you can print out the burger, taco, donut, ice cream, or watermelon, candy templates as well.

2. How to make maracas

Do you have a small, empty, plastic bottle at home? What about an empty toilet paper roll and some small, bright objects (beads, paperclips, sprinkles)? That is all you need to make these fun DIY maracas! Another option is to use plastic Easter Eggs, like in our Cinco de Mayo Activities for Kids!

First, learn about what a Mexican jumping bean is and why they jump here. Then, learn how to make your own jumping bean using aluminum foil and a marble here.

Read to play some Mexican games for kids? These are lots of fun!

Print and play this Toma Todo game called La Pirinola. It is a simple way to learn some basic Spanish as well!

Go round up your marbles, and play the classic game that has been loved for generations in Mexico. You can learn how to play here.

Another longtime favorite is the game of jacks. If you don’t know how to play, you can learn how here.

Grab your favorite soccer ball and head outside for some exercise! Soccer is called fútbol in Spanish (not to be confused with American football) and is a very popular sport.

From corn tortilla chips to elote (Mexican street corn), Mexico has lots of fun recipes that use corn! Here are a few to try.

If you have never tried Mexican street corn (called elote in Mexico), then you are in for a real treat. Try out this recipe, and you will never eat “naked” corn on the cob again.

Are you saying, “but I can’t find good corn on the cob right now?” Don’t worry, you can make something similar using frozen corn with this skillet mexican street corn recipe.

Sounds like it would be hard to make homemade tortilla chips, right? Well, it is actually quite easy using corn tortillas. You can even make them in the microwave, if you would like! Here’s how to make this delicious Mexican snack.

While there are many Mexican recipes that use beef, today I thought we would focus on chicken. However, feel free to substitute as you see fit!

Who doesn’t like a one pan meal? This one pan Mexican chicken and rice recipe on takes 30 minutes and has minimal clean-up afterwards!

If you are up for a little bit more work, you can go all out and make these chicken enchiladas instead.

Another easy recipe is to make Mexican chicken soup. I usually tone back on the mildly spiced red broth in this recipe, because my girls are adamantly opposed to even a hint of spice (but we are working on that!)

These kids books about Mexico are a great way to learn more about the country, while practicing reading! Some are even available for free with  Amazon’s Kindle Unlimited program, which you can try for free (and you do not even need a Kindle).

Meet Chicano Jr., a boy from Mexico who grew up in America. Travel with him to meet his grandparents in Mexico for the very first time.

Your child will learn all about Mexico’s history, culture, wildlife, geography and other fun facts about Mexico. It is the perfect book for kids who are taking a virtual trip to Mexico!

The Book of Unknown Americans

For our older kids, this is a story about a fifteen year old girl who has an awful injury, forcing her to risk everything to move to the United States from Mexico. Once in America, she becomes close friends (and ultimately, star-crossed lovers) with the mayor’s son who lives next door.

Do your kids want to learn how to speak Spanish? It is an increasingly important language to know! You can take free Spanish lessons here.