You are here: Home / Educational Resources / Art / 41 Memorial Day Activities for Kids & Lesson Plan
When you buy through our links, we may earn an affiliate commission. As an Amazon Associate we earn from qualifying purchases. Learn more. 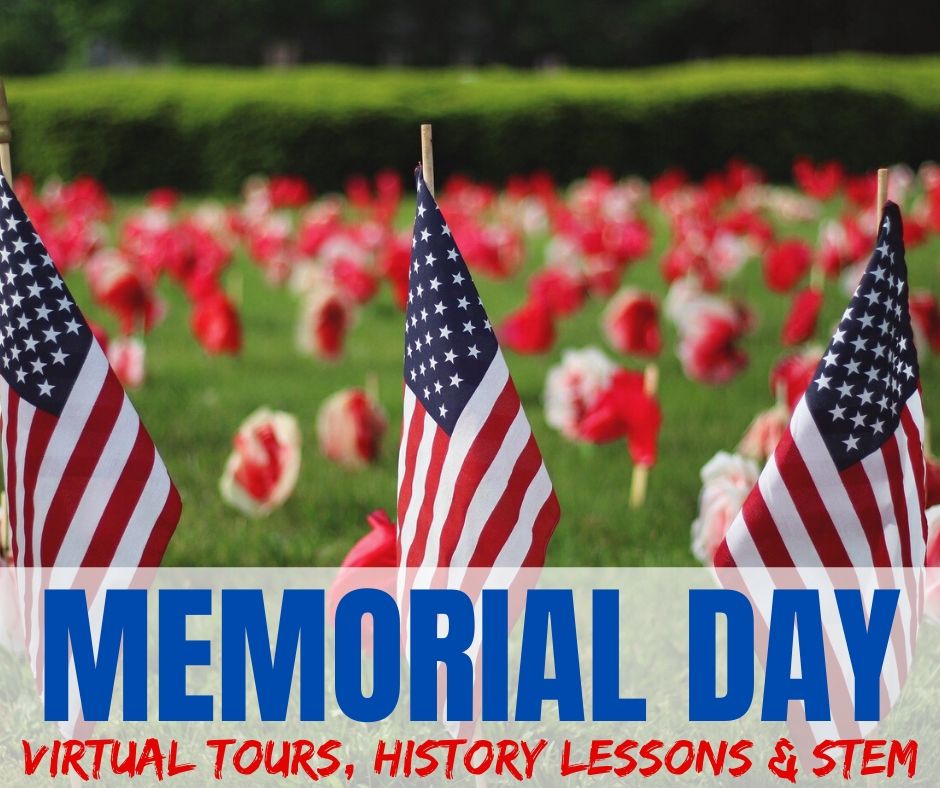 Memorial Day is a day of remembrance on the last Monday of May. On this holiday, we honor those who died while serving in the U.S. Military. It is very important to me that my children honor these brave men and women. My grandfather served in the U.S. Navy, and luckily he did not parish, but that was not the case for some of his friends. My children will never take our country or our freedom for granted, and they are reminded of it daily though this “Home of the Free Because of the Brave” sign that we display proudly on a bookcase in our home.

There are tons of Memorial Day activities for kids in this lesson plan, including Memorial Day Virtual Tours, fantastic history activities and U.S. Military STEM projects like learning Morse Code, making DIY invisible ink and making egg carton air gliders. There are also Memorial Day math worksheets and a fun DIY poppy craft (using materials you already have at home!) But, before we begin, join our Facebook Group and follow us on Pinterest, so you won’t miss out on any of our educational fun!

You can take a 360° virtual tour of the Wright Patterson Air Force Base in Ohio here. In addition, they have podcasts and videos to teach you more about the Air Force. You can even experience sitting inside of 100 aircrafts with a Cockpit360 app, which is available to download here for free in both Google Play and Apple stores.

The National Museum of the U.S. Army Campaign, located in Fort Belvoir, Virginia, is currently under construction, but you can still explore their exhibits here and view some of their American Army artifacts.

The National Museum of the U.S. Navy is in the Washington Navy Yard, located in Southeast Washington D.C. They have a boat load (pun intended!) of U.S. Navy artifacts and museum exhibits that you can view here.

The National Museum of the Marine Corps is in their final phase of completing a 115,00 square foot addition. This U.S. Marine Corps’ museum is located in Triangle, Virginia. You can view some of the Marine’s galleries and exhibits online here.

The National Park Service is hosting a Virtual Memorial Day Service at Vicksburg National Military Park, along with 24 other national parks. You can view the service here.

The ultimate Memorial Day kids activity is to explore the military history of The United States of America. Memorial Day was originally called Decoration Day and was a holiday to honor those who died in the Civil War. Shortly after World War I, Decoration Day became known as Memorial Day. Today, the holiday honors the men and women who passed away serving in the American military in any war, including World War I, World War II, The Vietnam War, The Korean War and the wars in both Iraq and Afghanistan.

Here are some fantastic articles for your kids to read about Memorial Day’s history.

If your kids are interested in further exploring America’s military history, here are some resources and lesson plans.

Memorial Day also marks the beginning of summer for many people. Here are some DIY Memorial Day craft projects and patriotic activities.

The National Museum of the Marine Corps has these free, printable World War I Paper Doll templates.

There are a TON of fantastic U.S. Air Force Coloring Pages available to print for free here. The following is a list of all of the kinds of planes that you can color!

Learn how to make a DIY poppy craft for Memorial Day in the following video. All you need is a piece of red paper, a green pipe cleaner and glue!

Let’s learn about some of the U.S. Military’s science and technology used throughout history

Learn what a Cipher Wheel is and how it was used by the U.S. Military in this STEM activity for kids.

What is Morse Code and how was it used during World War I? You can learn about it and write your very own Morse Code with this free, printable activity for kids.

The U.S. Navy uses a form of Semaphore Flag Signaling to communicate. Discover what Semaphore Signaling is, how it works and practice deciphering flag messages with this free, printable activity packet.

Learn about the history of flight in the U.S. Navy, along with how aerodynamics work with these free, printable worksheets. Here are all of the fantastic projects you will create!

How Do Hot Air Balloons Work?

What role does aerodynamics play in hot air balloons? Plus, make your own hot air balloon out of a trash bag, paperclips, a string and a hairdryer. Download the activity here.

How Do Airships Work?

Airships are similar to hot air balloons, but instead of using heat, airships use lighter gases to push them in the air. Learn how aerodynamics and buoyancy works with airships and build your own out of mylar helium balloons, non-helium balloons, toilet paper, string and modeling clay. Download the worksheets here.

How Do Airplanes & Jets Work?

Airplanes are heavier than hot air balloons or airships. How do aerodynamics come into play with airplanes and jets? Learn the difference between lift, weight, thrust and drag, and build your own paper airplane models. Then, use these worksheets to document your paper airplane trials.

Make your own simple propeller with these simple instructions from the National Museum of the United States Air Force.

Do you have an extra egg carton? Then, make your own egg carton glider by following these steps (complete with a printable template!)

Your kids can practice their math skills, while celebrating Memorial Day and learning about how math is used by the U.S. Military!

Learn how air and water pressure calculations are used by the U.S. Military, and practice math just like the U.S. Navy in this fun math activity.

Here is a list of Memorial Day color by number worksheets to practice multiplication, number identification or division facts.

Practice your addition with these free, printable worksheets. Your child will roll two dice, add the numbers together and then color the number that they get. Checkout these Dice Games for more fun with dice, as well as for instructions for how to make your own dice!

Learn about symmetry and practice drawing symmetrically, with this fun Memorial Day worksheet. It comes in two different skill levels, making it perfect for a range of different ages.

Print your own math game called the Memorial Day Run to 120 here. This free math board game is the perfect way to practice addition facts up to 12 and to learn about the 120 number board.

And the most fun part… share a photo or video of your Memorial Day projects on Facebook! Make sure to include a link to this website or to our Facebook Group and Facebook Page, so that we can see it too! I’ve purposefully added a lot of options for parents who need to keep their kiddos occupied for more time and to allow you to cater to your children’s preferences.