You are here: Home / Lesson Plans / Black History Movies About Racism & Race for Kids
When you buy through our links, we may earn an affiliate commission. As an Amazon Associate we earn from qualifying purchases. Learn more. 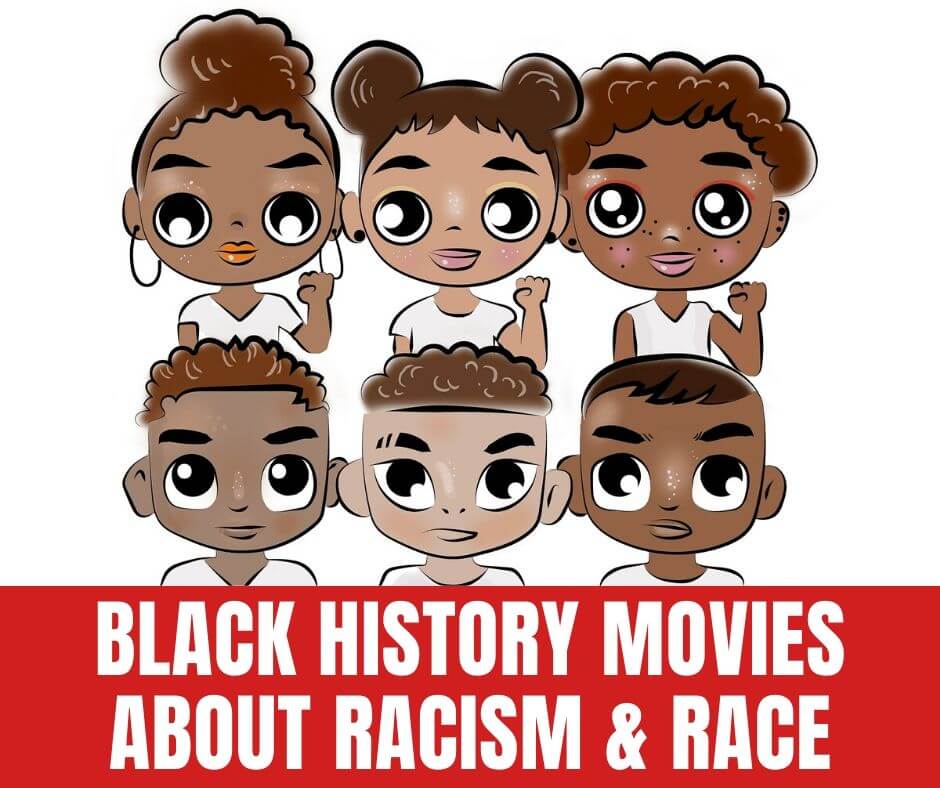 Very few things in life that are worth doing are easy. The topic of racism, prejudice and race is not an easy one to discuss, but it is essential for all of our kids to understand. Watching these Black history movies about racism for kids is a start, but even more important than watching them is having meaningful conversations after. I have found it very helpful to also do this Africa lesson plan with my kids, so they can better appreciate and understand some of the topics and settings in the movies. Many of these movies are available to stream via Netflix or Amazon.

Launching astronaut John Glenn into outer space was a big event for America, but have you heard of Katherine Johnson, Dorothy Vaughan, and Mary Jackson? They are three Black, female mathematicians who played a huge role when NASA began it’s space program. Hidden Figures shows how these three incredible women overcame both race and gender obstacles to successfully launch Glenn into orbit! Make a whole day by adding outer space STEM activities too!

Based on a true story, Remember the Titans takes place in Virginia in 1971 at a high school that was recently integrated. Herman Boone, a high school football coach, struggles to make his team work together due to racial tensions.

Disney made this movie based on the real story of Ruby Bridges. She was a six-year-old girl who was one of the first Black students in an integrated school in the South. Ruby eventually ended up attending an all-white school in New Orleans and had to cope with a tremendous amount of racism there. Ruby Bridges is a well done Black history movie about racism and the struggles it causes, even for children.

We have all heard of Martin Luther King, Jr. and Malcolm X, but have you heard of their wives, Coretta Scott King and Dr. Betty Shabazz? After their husbands deaths, these two women formed a close friendship to keep pushing forward the civil right movement. Betty & Coretta is all about their incredible friendship and the impact they made.

Phiona Mutesi, a 10-year-old girl, lives in Kampala, Uganda. She has a life-changing moment when she meets a missionary who teaches her the game of chess. Ultimately, she becomes a chess prodigy internationally, but she struggles with racism and poverty along the way.

Disney’s Glory Road is about the first basketball team that was all Black. The white coach, Don Haskins, introduces this team to the NCAA University Division Basketball Championship in 1966. There is a tremendous amount of criticism and racial tension, both within his team and by others who are not happy to see an all Black basketball team.

7. The Color of Friendship

Another Disney film, The Color of Friendship, is based on a true story of two friends, Mahree and Piper. Mahree is the daughter of a Black congressman and Piper is a white girl from South Africa. Their friendship results in both of them learning a lot about each other’s background, history and countries.

8. The Secret Life of Bees

While this movie has some violence, and is probably more appropriate for tweens, I did not want to leave it off the list. It is about a white girl named Lily who runs away from her father with Rosaleen, her family’s Black housekeeper. They go to Tiburon, which is where Lily believes that her mother came from, and she learns all about beekeeping.

This movie is based on the real-life friendship between Emma Smith, the wife of the founder of Mormonism, and Jane Manning, a Black woman. Jane travels 800 miles by foot to meet Emma, and ultimately becomes the first Black member of the Church of Jesus Christ of Latter Day Saints. She definitely faces racism, as not all members of the church accept her, but she does not let that stand in her way.

Akeelah Anderson is incredibly talented at spelling and is encouraged to compete in the Scripps National Spelling Bee. She has to deal with racism from some of her competitors’ parents, but is able to overcome the many obstacles she faces.

This movie is a comedy from 1967 and was one of the first movies to ever show interracial marriage in a positive light. It tells the story of a woman who meets a Black physician on her vacation in Hawaii. Ten days later, when she returns home, she surprises her parents by telling them that she just got engaged!

12. The Boy Who Harnessed the Wind

This movie is based on the memoir The Boy Who Harnessed the Wind, which you MUST read, if you haven’t yet. William Kamkwamba is a 13-year-old boy who reads a science book and decides to build a wind turbine, in an attempt to save his village from famine.

Are there any Black history movies about racism and race for kids that we forgot? Drop a comment below with your suggestions and join the conversation in our Facebook Group!